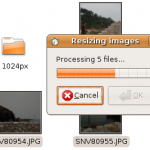 I just uploaded the first public release of my Resize Image Nautilus Script. It’s a small extension to GNOME, the desktop manager used by Ubuntu. The script allows you to easily shrink image files to a sane size with two mouse clicks:

Right-click a photo, choose “Resize Image”, done. The files size of pictures will be reduced to around 50 – 150 KB, depending on the selected target size. This one is for all you people that send me 3 MB holiday snapshots by email — who needs 10 megapixel photos anyway? 😉

Thanks to Ani and Tino, who hosted me at Pension Sighisoara while I was finalising my first fully documented GPL software release.

Throwing together a quick hack for your own use is one thing, but preparing your creation to be used and extended by others (translation: make idiot-proof) takes a good few more hours. Add comments and safety nets in the code, polish the interface, think of future extensions, test on other computers (I should have done that, but I leave that part to you, hehe), write documentation, make screenshots, create a software homepage and announce the release — quite some overhead. But I feel it was worth to go that extra mile.

So, if you use GNOME, please try out the script and leave a comment.

For people interested in my lightning talks about PowerTOP, BeWelcome and the TransHackMeeting Istanbul 2010 I uploaded the presentation slides to my sandbox. Wow, that was a sentence with a lot of links. 🙂 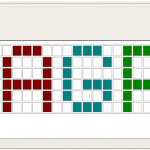 I just got this art piece by email from a person unknown to me. It contains a HTML table with coloured cells that form the letters V I A G R A.

To trick spam filters spammers always need be one step ahead of filter maintainers, which results in a constant creative arms race, letting both sides dive deeper into existing technology. Our spam filter at Ecobytes for example looks into PDF attachments of emails, finds images with text and tries to read the text to search for offending words. I find that quite a performance for a machine a.k.a. toaster. But in this case the spammer actually used some retro thinking. Bravo! Good luck finding spam signatures in coloured tables, dear spam assassins. 🙂

Spam has been inspiring artists since a while now. Check out Alex Dragulescu’s beautiful Spam Plants, Linzie Hunter’s typographic Spam One-liners or the Spam Garden. On the other hand there is ASCII art spam too now.

Here is my response: I just wrote a table text generator, which you can use to create pretty text like in the image or to scramble your email address. 🙂

PS: Yes, this is the first post with an image on this blog. There will be more!

Maybe some of you have heard of such thing as the Unix time, counting the seconds since the 1 January 1970 – something like the beginning of the Unix age. This number is around 1234519870 right now and will reach 1234567890 tonight, Friday, 13 February 2009 23:31:30 GMT! I just spotted this while finding my way through database entries. If you are into numbers at all and into Unix-like things this will blow your mind, if you are not, you simply won’t care or even notice. 🙂 However, it appears that completely normal people celebrate this day around the world. Join the party!

Unfortunately the environmental activist summer camp that I attended the last seven years all over Europe, the gathering of idealists, mavericks and tree-huggers that changed my life into a nomadic hacktivist existence, is not going to happen this year. Unfortunately?

After some 20 years of Ecotopia the organising NGO EYFA, which I am part of as a board member and web-monkey, has decided to discontinue their annual summer camp under the name of Ecotopia. Some people on the EYFA board have not been so happy with this decision, but since the folks working in the office — who are doing most of the hands-on work — wished to radically change the summer meeting, including finding a new name, we found consensus on the issue.

According to what I heard last, EYFA will organise a different, much shorter meeting focussed on activism this summer and possibly the years to come. I heard the term conference-style somewhere. It’s all a bit vague and I’m curious to find out what’s it going to be. Update May 14th 2009: The new event is called Climate Action Camp and will take place near Antwerp 3rd to 9th of August 2009.

However, the Ecotopia biketour 2009 will take place in a similar fashion as before. Check the Biketour website for updates (no 2009 info at time of writing). As for Ecotopia 2010 the Ecotopian community is working hard on what in software development would be called a fork by the name of “Ecotopia?” — taking place near Belzig not far from Berlin. I’ll be there! 🙂

Planning to buy some fancy new hardware by Apple, Fujitsu Siemens, Dell, Lenovo, Motorola, Nokia or Sony? Well, think again! Did you ever wonder why electronics are so cheap, and getting cheaper by the day? Yes, new materials, more efficient production lines, higher number of items — but what about the people putting the parts together, doing the dull work that can not be automated?

The dark side of cyberspace is not the name of a new fiction by William Gibson, but a very real report about sweatshop labour at Chinese production facilities for consumer electronic brands — published yesterday by Berlin-based WEED (World Economy, Ecology & Development) and Hongkong’s SACOM (Students and Scholars against Corporate Misbehaviour).

Apart from details about workers’ conditions and statistical facts the report contains various photos from inside the plants, secretly taken by the researchers and the interviewed workers. Read the report summary or download the full report (PDF, 1 MB) and see for yourself.

So, what to do? It is hard to avoid those brands, and even companies not producing at the factories mentioned in the report are likely to cut costs by buying extremely cheap labour. Currently there does not seem to be a way out. :-O Or is there?

Today is international Buy Nothing Day. Go ahead and try to buy nothing! If you are reading this today you most probably already failed. The electricity that powers your terminal, the Internet connectivity, the gas that heats up your room, today’s share of your health insurance – you buy all this from someone. There is nothing wrong with that per se, but one should be aware of the fact of constant consumption, and reflect on the consequences of each single intake.

The use of fossil fuel for heating is an obvious one, with climate change being discussed everywhere these days, but who supplies your Internet? Is there a big monopoly consortium behind the provider, are there maybe smaller, more ethical companies that can supply the same service? Can you switch your home or office to green electricity? What does your insurance company invest your money in? Find out!

So if every Euro/Dollar/whatever is a vote for a certain part of the economy, please be aware what or who you are voting for.

Here in Ankara I was encouraging people to take part in a small action, but I assume the late notice and the concept of culture jamming being somewhat unknown around here caused the lack of willing participants. So my host Gulnur (thank you for having me!) and I will go to the centre of town now to print some flyers and stickers and spam alternative meeting points with them. And hopefully right after today people will start to gather in large groups to prepare massive actions for next year’s Buy Nothing Day. 😉

As a nerdy sidenote: I just realised that Adbuster’s BND wiki is running on a Micro$oft powered webserver, see this error page. Not very revolutionary, dear Adbusters tech team. Please follow these instructions and apt-get install apache2. Or ask Ecobytes to host your wiki entirely on FLOSS. For free of course. 😛

Yep, after working like there is no tomorrow for G+J in Hamburg for a few months — hence the silence here — I am officially on the road again. Still hitch-hiking, but now accompanied by a fully featured small fold-up bike (R+M Birdy premium + mud guards + back carrier) — I call it hitch-biking. Getting from Hamburg to Vienna via Schwerin and Munich was surprisingly easy, despite the relatively big cargo. This tells you how much unused space there is in cars on the road. One empty truck took the bike into its empty cargo room — there would have been room for hundreds of bikes, even unfolded! Anyway, all those moments when I badly wished for a bike while walking for kilometres from a drop-off point to the next good starting point are now past. Unfold bike, mount Greenpeace bags, be cycling happily, cycle a little further just for the fun of it. 🙂

Just so you have a better chance to get hold of me, here is my current Travel Plan for this summer.