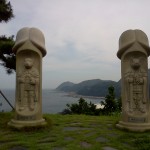 Since I am spending some time in this lovely country I looked into connecting to my environmental activism roots a few days ago and checked out what’s going on with tree huggers in the Chaebol kingdom.

It came as a small surprise that green opposition politics don’t really exist here or are at least gravely underdeveloped for a country with recent annual GDP growth around 5%, dramatically growing energy needs and ever increasing urbanisation – a country that is member of the friendly G20 and that features beautiful nature all around.

There was an attempt to establish a Korean Greens party starting in 2003, which failed in 2008. Right now the party is re-establishing itself, after being terminated yet again following a meagre 0.43% result in general elections earlier this year. It looks like the general public in South Korea has no interest in a green party. Now, why is that?

It appears that the current government lulls the population with plans like Green Growth (which Green Korea has solid criticism on) and tries to silence foreign critics of their nuclear energy strategy by simply not allowing them into the country. Details on the recent Greenpeace activist deportation also mention a 30% budget increase to more than $10 million USD after the Fukushima disaster for KONEPA, the South Korean agency for promoting nuclear energy with faces of playing children. This money will most likely not go into spreading information about incidents like the recent shut-down of two reactors in the south of the country on 2 Oct 2012.

The Energy Korea portal aggregates an interesting mix of general environmental news, including critical Greenpeace reports and at the same time greenwashes fossil fuels and nuclear energy, both of which -oops- the maintainer of the site, Daesung Group is heavily invested in.

However, there are people working on change for the better, for example prize-winning Yul Choi, a white-collar activist involved in various South Korean environmental projects since many years. Aforementioned Greenpeace Korea twitters daily, organic farming definitively exists and the Asia-Pacific Economic Cooperation Virtual Center for Korean Environmental Exchange (catchy name!) helps to flog off green technology. Friends of the Earth Korea also seem to be doing a lot of things including information centres and an organic online shop, but unfortunately don’t have an English website at the moment.

Also you can contribute by either getting involved with existing groups, or for starters by signing the Nuclear-free Samcheok petition. 🙂

When writing this I relied mostly on websites written in English. If you have pointers to websites in Korean or other languages, please send them to me and I will include links here!