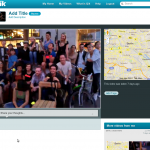 A week ago various “makers” from around Moritzplatz in Berlin Kreuzberg hacked the public space surrounding them and celebrated Makerplatz. During two days dozens of micro events and performances took place between different locations in the area. To capture the decentralised nature of Makerplatz, to document and to give orientation while things are happening throughout the day, performer Brina Stinehelfer inspired a live internet broadcast performance.

Following the everyone-is-a-publisher spirit of the early internet days a DIY set-up was quickly cooked up using available technology: A smartphone with a free live-streaming app, the app’s website repeating and archiving the streams and the Makerplatz website to announce content. Done. The videos were played live on a battery-powered mobile info point and projected in the Betahaus café. All what was needed now was Brina to walk around and report live. See the 83 videos she took at qik.com/makerplatz.

Initially I was not even going to be at Makerplatz, but invited by Judith of Trial&Error and lured by free food I hung around a preparation meeting hosted by Platoon in Mitte three days before the event. Suddenly I found myself in a discussion about wireless mesh clouds on Moritzplatz and video streams from mobile phones. I decided quickly that I want to be part of the performance, shuffled around my travel plans a little and agreed to give technical support on site.

After a quick evaluation of alternatives the centrepiece of the broadcast became Qik, a freemium live video sharing site with apps for all major mobile platforms, recently bought by $kype. We used a recent Android phone by HTC with 2 cameras. Once the app was installed and a Qik account was created we could already record video on the phone and view it on qik.com a few seconds later. We tested with a free Qik account first, but it’s limited to 20-something clips, so we upgraded to a free premium trial. Note to self: Don’t forget to cancel premium account in 2 weeks from now.

On this particular phone a live broadcast was lacking video and fluent audio when viewing it on qik.com during recording. But once recording was stopped and the clip was completely uploaded, sound and video were fine. Other Android phones had no problem broadcasting video while it was being recorded, so you might want to try different handsets and see which one works best for you. Also make sure to share videos publicly by tapping the padlock in the record screen to open it, otherwise you won’t see the videos on the public channel. This was a gotcha for us a few times. 😉

Brina’s phone was connected to the internet via roaming between 3G, HSDPA and wireless, which worked out quite well. The screen at the mobile info-point however was relying on a wireless connection of a café at Moritzplatz, which faded away in the afternoon. Next time we’ll make sure to have a USB dongle for mobile internet and then be able to move around independently.

On the morning of the second day I wrote a small HTML page (benn.org/makerplatz) which plays the latest video from the qik.com/makerplatz/latest-videos RSS stream when loaded. I am using jFeed with its PHP RSS proxy for parsing the feed. Due to the lack of JavaScript events fired by the Qik player and missing playing time in the RSS feed, the page simply refreshes every few minutes to play the next video if it’s there. This is less than ideal, but it’s the only solution I could come up with in the little time I gave myself for this. Initially I tried using the Qik JavaScript API, which proved to be pretty useless due to cross-domain security limitations, and I highly doubt that anyone ever successfully implemented it. A friendly email to request an API key still hasn’t been replied to. In summary: Forget about the Qik JavaScript API.

Yay, that was a fun 3 day hack. I wish I could have done this using free/open-source technology, but I’ll leave this for next time. 🙂 Thanks to Judith, Brina, Manuela, Jay, Marcello and all other makers at Makerplatz! 🙂

One Reply to “Makerplatz live documentation”